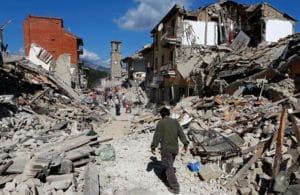 Every few years a part of Italy is struck by earthquakes. This often leads to destruction of houses and historical monuments and, unfortunately, deaths. Who does not remeber the earthquake that destroyed the historical city of Aquila, less than ten years ago. Or the one that partly destroyed the church of San Francesco in Assisi. I remember visiting a village near Norcia once that was still completely uninhabitated years after a quake. A spooky town. The last big quake happened last year in the Le Marche and Abruzzo regions. These are situated in the central-southern part of the peninsula, at the Adriatic. See my post of the geography of Italy. Le Marche or the Marks is a region that has become more and more known and popular among tourists. It is sad that this natural disaster has dealt a severe blow to this industry. Tourism was (much) lower in 2017 and even some unfortunate bed and breakfasts, pensions and agriturismo’s had to close down as a result of the damages. Most notably the hotel Rigopiano that was completely destroyed. Also, the well-known village of Norcia, famous for its truffles, was severely struck. 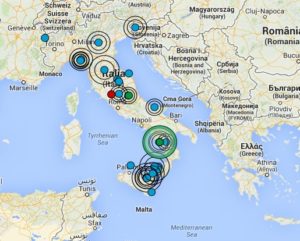 Our bed and breakfast is in the north of Italy in a zone with a low earthquake risk. The Istituto Nazionale di Geofisica has issued a earthquake risk map of Italy that shows that central Italy is most at risk, due to the fold running across it.  Its is there where the African and Euroasiatic shields meet. If you plan to buy a house in Italy in these areas this risk is a thing to consider seriously. Better make sure your house is earthquake proof and stay away from the more risky areas. The closest we in the south of Lombardy came to experience the effects of an earthquake was when there was a rather small one in 2015. This one had its epicenter near Modena. But we did not feel it, nor did we see ceiling lamps starting to swing. Our dog did not show signs of alarm either. The only earthquake that really scared us we experienced in The Netherlands when our bed started to shake in the middle of the night!

P.S. On November, 19th, 2017 a 4.4 earthquake occurred near Parma. We did not feel the earth shaking but some people in the region did!

The Italian word for earthquake is terremoto, literally moving earth.