Italian Gelato – the ice-cream on a diet 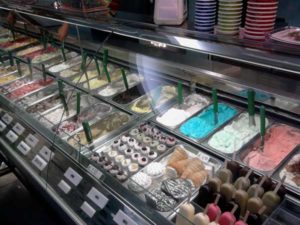 Italian ice-cream, the gelato, is famous all over the world, so once you are in Italy you should have a try at least once (twice?) a day. How else are you ever going to try all the different, delicious tastes available? Now luck has it that a gelato isn’t as fattening as an ice-cream, as the Italians use milk to prepare it, instead of cream.  The ice parlours are all over the place in Italy and many of these will provide you with a decent and tasty delicacy. Just make sure to look out for the term artigianale or produzione propria or fatto in casa as this means that it is home-made instead of industrial. And at the most touristy areas watch out for scams, as it has happened that gelato was sold at 16€ in Rome!

Where to get the best gelato in Milan and surroundings: