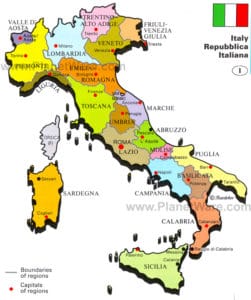 Yes, Italy is shaped in the form of a boot, most people know that and it is easily recognizable when you look at the map of Italy at the south with Calabria as the toe and Puglia as the heel. But who knows to pinpoint all the other regions? There are so many! Cities are easier but Rome, in which region is it situated? Milan is in Lombardy, okay, Turin in Piedmont, Florence in Tuscany, but Venice, Genua? Naples! What is the name of its region? The Cinque Terre, are they in their own region or is it Tuscany? Aiuto, help! Palermo is in Sicily, easy peasy, but what is the capital of Sardinia and … was it the northern of the two big isles east of Spain or is that Corsica? Corsica is French, right? And then the Adriatic and the Tirrenean seas: I could never remember which one is which until I thought of this trick: Adriatic comes first as it starts with an A and so it is most ’up’, i.e. north and the Tirrenean starts with a ‘T’ and is therefore on the south coast. What a relief! We need more tricks to be able to memorize the Italian geography. Fortunately, there is some help here: associate each region with a picture characteristic of its history or culture or personal experience and invent a story in which these elements appear in the right order. See https://www.matteosalvo.com/come-memorizzare-le-regioni-ditalia/ for an Italian example. Have a try and let me know in the comment!