The National Anthem of Italy 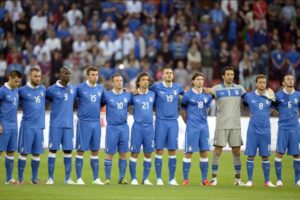 “Siam pronti alla morte, sì!” sang the soccer players of the national football team, gli Azzurri, before the decisive match against Sweden a week ago. Although they sang the lines of the Italian national anthem clearly, they didn’t die, but they did not win either and for the first time in 60 years the unthinkable has happended. Italy will not participate in the World Championship 2018. And Italy’s popular national hymn will not be heard in Russia next year. 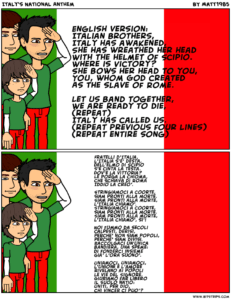 The National Anthem of Italy, l’Inno d’Italia, has a history as turbulent as the state itself. It was already written and composed in the first half of the 18th century, before Italy even existed as an independent nation. But when Italy finally was united, as a kingdom, the hymn was considered too revolutionary for the monarchy. Mussolini did not care for the composition either and so it was only after WWII that Mameli’s song was declared to be the official national hymn. Provisionally, that is. It has never become such by law. Several attempts were made the last 70 (!) years, but were all shipwrecked by lack of unity and interest, as happens with many proposed laws in Italy. This is in stark contrast with what the text of the hymn suggest should be the attitude of the Italian people. But Italy may well be unified since over a century, its inhabitants are not, far from it. The Lega Nord party, striving for independence of the northern regions Lombardy, Veneto and the others, prefers Verdi’s Va pensiero, the slave choir song from the Nabucco opera. Even though Verdi himself accepted Mameli’s work as the true hymn.

The text of the national anthem 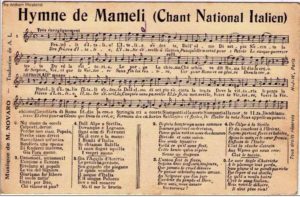 The music of the still unofficial hymn does in fact have a Verdi-like operatic tinge to it. Maybe that is why it is one of the most popular of all national hymns of the world. The text of the five stanza’s is quite cryptic, but the ritornello refrain is easy:

Let us join in a cohort,
We are ready to die,
Italy has called.

But in reality nobody ever dies in Italy. The Italians rather are masters in avoiding the real fight out of fear for death. Check Barzini’s analysis of the national character in his very informative and entertaining book “The Italians” for this. The first stanza ends with the declaration that victory should become the slave of Rome, which is precisely what the Lega Nord voters cannot possibly get out of their mouths.

Brothers of Italy,
Italy has woken,
Bound Scipio’s helmet
Upon her head.
Where is Victory?
Let her bow down,
For God created her
Slave of Rome.

The other stanza’s recall the few victorious moments of Italian history which all occurred long, long ago in Roman and medieval times. Not the most inspiring of texts really, but in July this year another step forward has been made to finally let the composition become the official national hymn of Italy. This might end the embarassing confusion that sometimes results in foreign countries about what to play at official visit of the Italian president or the like. At one point the orchestra started playing O sole mio when the Italian official started descending the stairs of the plane with which he arrived. Not a bad replacement maybe, as that song is world famous and quintessentially Italian. More so than the fratelli d’Italia. Or could I propose ‘Volare’?