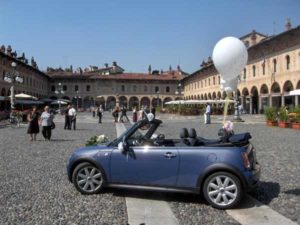 The small historical town of Vigevano, at a short distance south-west of Milan, has one of the most beautiful Renaissance squares of Italy. No wonder that many newly wedded couples come to this place to have their pictures taken. Vigevano’s era of fame lasted for about two centuries, when during the Renaissance period the city was governed by the Visconti and Sforza families respectively. It is the birthplace of Ludovico il Moro. The square is said to have been designed by Bramante by order of the same Ludovico il Moro (a Sforza ), as a kind of vestibule for the adjacent castle. Actually the piazza is not a square but a rectangle of balanced proportions, enclosed by decorated portico buildings on three sides and a Baroque style cathedral (of later date) on the fourth. From the piazza one enters the castle complex via stairs underneath the Bramante tower , as the castle lies at a higher elevation than the square. Originally there was a large ramp leading into the center of the square, to allow carriages to access the castle. This removed in the 17th century when the cathedral was built. All the decorations on the facades of the buildings are early 20th century reconstructions based on the traces of the original ones that were left.  Note the beautiful motifs in the cobble stone pavement. The statue at the far end of the square represents St Matthew. 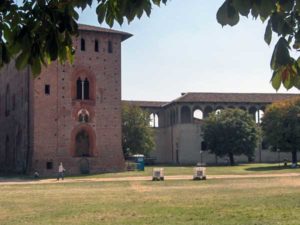 Vigevano has its own Castello Sforzesco , just as Milan, built by Ludovico il Moro in the 15th century . It’s adjacent to the square , that was constructed at the same time, also by Ludovico . Leonardo da Vinci stayed here as a guest and also Bramante came to work for the count: he is said to have finished the famous tower , originally a 12th century construction. From the Piazza Ducale you enter the spacious castle courtyard via the stairs (under the Torre), as the ground floor of the complex is raised in comparison to the piazza .  The enormous castle complex (70.000 sq m) consists of
the Bramante tower , 75m high, visitable (tickets at the InfoPoint); the three scuderie , or stables, left and opposite of the entrance, of which the 2nd houses the Shoe Museum and the 3rd the Pinacoteca / Archaeological Museum (closed for renovation); a falconry ; elegant loggia supported by 48 columns, decorated with frescoes and recently renovated the maschio or residence building, with the Sala dell’Affresco; the massive covered street , 164m long, 7m wide and bridging a 10m height difference, meant to allow the duke to enter and leave (flee) the castle with horse and carriage without being seen the underground street;the Loggia delle Dame , the only remaining part of the Palazzo delle Dame , made for Duchess Beatrice d’Este; the 19th century cavallerizza. 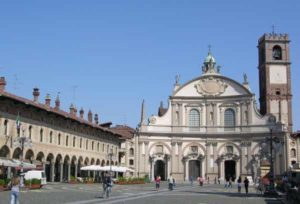 This early 17th century Duomo was built on the premises of a 14th century Basilica dedicated to St Ambrose, as ordered by Francesco Sforza . The Baroque facade was constructed in the 17th century. The campanile tower is the result of several stages of building, the last one as late as 1818. Albeit of a different style than the rest of the piazza , the cathedral still presents a pleasant closure of the eastern part, probably also due to the particular curvature of the facade that seems to “embrace” the square. Inside you’ll find: the polyptych Biffignandi (Madonna with Child); a 15th century work by Ferrari (2nd chapel left); the 16th century altar (2nd chapel left); the triptych Gusberti (baptism of St Augustine) and St Thomas of Canterbury also by Ferrari (St Charles chapel right); an 18th century organ (presbytery); a 16th century funeral monument for bishop Pietra (entrance of the right sacristy). Of particular interest is the treasury , partly based on possessions of Francesco II Sforza, that has on display: valuable corals, missals, codices and manuscripts, a bishops crook, called La Pace , in narwhal ivory, a gold-plated silver reliquary, Flemish tapestries and standards, a pure gold embroidered vestment worn by Napoleon at his coronation. The treasury museum is open on Saturday from 3-6:30 and Sunday from 9:30-12:30 & 3-6:30 or on request. A photo gallery is available at the website of the diocese.