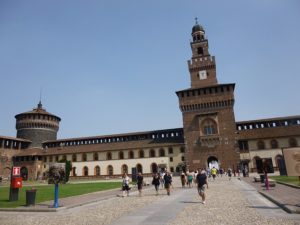 The actual Sforzesco Castle is for a large part a 19th century reconstruction of the Renaissance building of the Sforza family. There are a lot of castles in Lombardy built in the Renaissance by the nobility of the time, mainly the Sforza and Visconti families. The Sforza Castle in Milan houses several municipal museums (one fee) the most interesting of which are to be found in the so-called Ducal Courtyard. At present, the Castle is a quadrilateral divided in three parts.

The first half is taken up by the Piazza delle Armi , with its landmark, the central (19th century) Filarete tower facing the city and with two cylindrical towers on each side.

The back half of the quadrilateral is covered by the Rocchetta (left) and the Corte Ducale (right).

The Rocchetta has an inner courtyard and a square tower. 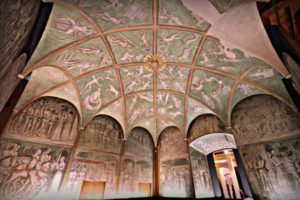 The Ducal Courtyard encloses the Palazzo Ducale and the Portico dell’Elefante . On the ground floor of the Palazzo Ducale you’ll find the Sala delle Asse decorated with paintings originally designed by Leonardo da Vinci . In the rest of the building you’ll find Michelangelo ‘s last sculpture, the Rondanini Pietà and Mantegna ‘s Trivulzio Madonna . The museum website gives a precise floor plans with clickable rooms (see first floor rooms 7, 8, 12, 15, 2nd floor ). On the first floor of the Rocchetta (reachable via the Palazzo Ducale museum) is the Sala del Tesoro (Treasury room), which contains the beautiful tapestries of the 12 months by Bramantino .

Leaving the Castle at the back (western) side, you enter the very pleasant Sempione park. 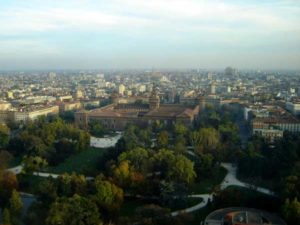 Oh, so nice! oh so nice! – The Christmas fair in Milan! Sempione Park – some fresh air in Milan