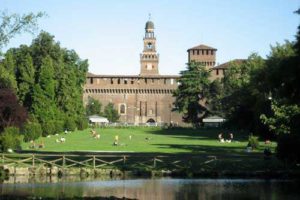 Shopping in Milan – the Fashion and Design Capital

Milan is world renowned for its shopping possibilities and you’ll find the most important streets and districts in this post. The most important (and expensive) shopping district, where all the major designer’s shops are, is the Quadrilatero d’Oro . Then there are the major shopping streets of Corso Buenos Aires , Corso Vittorio Emanuele , Corso Magenta , Corso di Porta Ticinese , Corso Venezia and the Galleria Vittorio Emanuele itself of course. The Brera and Navigli districts also offer a wide choice of shops. The largest and most modern shopping mall is the Piazza and Portello , further out north west of the city. If you want to go for an outlet store , the best choice (only by car or by bus tour ) would be the Serravalle Designer Outlet Center . They claim to be Europe largest! There is another large outlet at Fidenza near Parma (also possible by bus tour ). Closer to Milan is the Vicolungo Outelt Center that also offers a shuttle service from Milan center.