The Battle of Pavia and the origin of the Zuppa Pavese 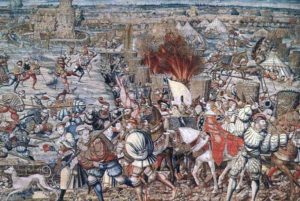 On February the 24th, 1525, almost 500 years ago now, the decisive battle that determined the supremacy over Northern Italy was fought in the large Visconti Park, just north of the city of Pavia in Lombardy. This battle is renowned for being the first example of “modern” warfare and also as being the first one in which hand-held firearms played a decisive role.

After years of struggle for the possession of Lombardy and a long siege of Pavia the French army suffered a devastating blow (comparable to the one at Agincourt) in which many high ranking commanders were killed and the French king, Francois I was caught. The emperor Charles V won and confirmed the Spanish possession of Lombardy for a long time to come. There are many artworks in museums all over the world that depict scenes of this battle.

Legend has it that after being caught Francois was led away from the battlefield to a cascina, farmhouse, in order to eat some food. Unfortunately the farmer’s wife only had a few edible things available and so she had to improvise a meal from the broth, the eggs and the stale bread she could provide.

Francois, being very hungry, appreciated the resulting soup so much that once freed and back in Paris he ordered his court chef to prepare it often. The improvised dish subsequently became known as the now famous Zuppa Pavese and is still served in restaurants of the region today.

The battle is reenacted every two years in September at the small town of San Genesio ed Uniti, between Pavia and Milan. 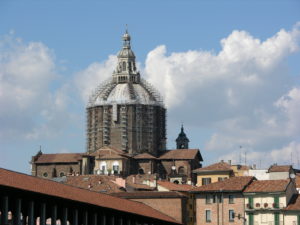 The Certosa monastery of Pavia 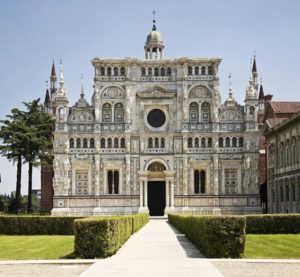 The Certosa di Pavia monastery is a definite must-see if you visit Milan or Pavia. It is an architectural gem and art treasure at the same time. It is located 8 km north of Pavia, near the hunting grounds of the Visconti family, that ran from Milan to Pavia. The monastery was built in the 15th century and displays a mix of Gothic and Renaissance style. The church was the last part of the monastery to be completed and was destined to become the mausoleum of the family (but their remains are not here). Originally the Carthusian order housed here (hence the name Certosa ), but since the early ’60s it is the home of ever fewer Cistercians. All over the monastery you’ll find the Gra-Car sign , designating the original name of the Charterhouse of Pavia ( Gratiarum Chartusia, Charterhous e of the Graces). 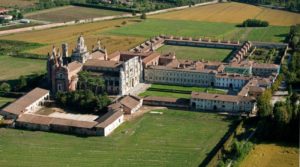 The monastery is free to visit (yes, unbelievable!) but you need to be aware that it closes early for lunch (11:30) and opens late again. Don’t be disappointed if it seems that the choir and the rest of the monastery are closed by a gate. Every now and then small groups are let in by a monk. There is also a museum in the foresteria or Palazzo Ducale of the complex (the wing to the right if you face the church facade). It displays artifacts and artwork of the monastery, like work by Campi, Bergognone and Luini . To visit the museum reservation is necessary. Outside the complex is a small bar with shadowy terrace and some souvenirs. Bring your mosquito repellent in summer as this is rice country.

The art of the Certosa – frescoes, paintings, sculptures 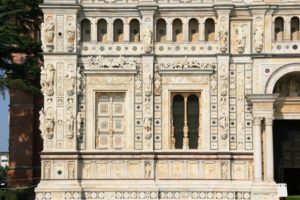 The Certosa represents a real art treasury , inside as well as outside. The facade presents an overwhelming display of decorations, reliefs and statues. It is in white and inlaid marble and is worth an investigation on its own (but bring an umbrella if you don’t want to burn away in the scorching sun). The lower part of the facade displays a series of medallions with portraits of historical Roman and mythological figures. Above it there is a series of scenes about the foundation of the monastery and the life of St Brunone, founder of the Carthusian order. The four magnificent windows left and right of the portal are the work of Amadeo . In the portal you’ll find base reliefs representing the life of Maria and the foundation of the Certosa (first stone). Note Pavia and it’s towers in the background! 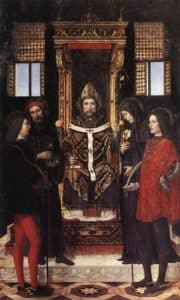 In the interior you’ll find frescoes, paintings and sculptures of several of the most important artists of the time the monastery was built. In the nave of the church there are 7 chapels to the left and right with masterpieces of Lombard Renaissance art. Such as: 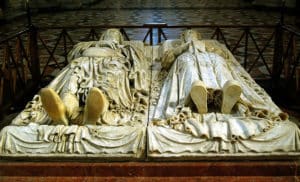 Once you managed to pass the 17th century gate (after waiting for the monk to let you pass) you enter the transept with:

The sacristy to the left contains an ivory polytich of 1400 depicting the lives of 94 saints. The presbytery has frescoes by Crespi (Story of St Bruno and of Christ) and magnificent wooden choir carvings, designed by Bergognone again. The room to the right of the presbytery, the sala del lavabo , is decorated with frescoes of Luini (Madonna with Child). 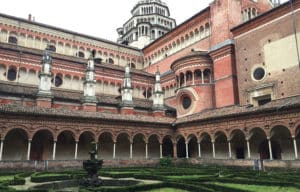 After all this you may enter the first, smaller of the two cloisters , for fresh breath of air. But don’t overlook the sculptures by Mantegazza and Amadeo of the portal (medallions representing the dukes). From the cloister one splendid view on the church building. The second cloister is much more spacious with the large green and the small monk cells around it (have a look inside).