While reading the excellent account of David Gilmour about the Risorgimento or unification of Italy, „The Pursuit of Italy”, I came across an anecdote that made me laugh out loud. It was about an Italian navy officer who during war refused to leave the harbour where he was stationed with his fleet. Even when he was ordered to do so by his superiors, he contrdicted the order. He was to attack an enemy convoy in the Adriatic. It was to be a sure win as the Italian fleet was in the majority by far. But the captain refused, venting a range of excuses for disobeying, one after the other. Finally, desperate for a new excuse he ended with: „We don’t have ammunition!” 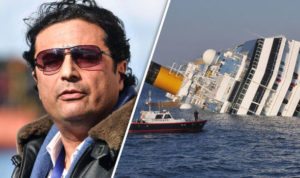 This made me laugh as it reminded me of the infamous captain Schettino of the Costa Concordia cruise ship. At at the time I read Gilmour’s book this ship had just gone down. A very sad affair where many lives were lost. Still, I could not help laughing about the war anecdote. It reminded me of the excuses captain Schettino presented for him leaving the sinking ship as one of the first, in a lifeboat. „I was walking on deck when I tripped and fell off board, to land very fortunately precisely in a life boat.” Yeah, sure, the communications officer in the Genova harbour thought, who believes such nonsense? „Vai a bordo, cazzo!” he responded, shouting. His words went viral and captain Schettino became the shame of the nation. Who could believe such cowardice? Well, apparently he was not unique in Italian naval history.

In the meantime Schettino has been sentenced to jail for sixteen long years- And the wreck of the Costa Concordia has been lifted and dismantled at an enormous cost.