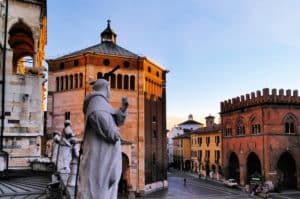 The city of Cremona lies at only a one hour drive from Milan and definitely is worth a day trip if you are interested in historical locations and … violins. Cremona happens to be the birth place of Stradivarius, the Guarnieri’s and Amati and still is a major violin producing community. You can visit a museum dedicated to the violin and have a look at the city’s violin collection. Apart from that, Cremona also has one of the most beautiful medieval squares of Italy , with the Duomo , Palazzo del Comune , Torrazzo , the Battistero and the Loggia dei Militi . The nice thing about Cremona is that you can easily see the whole of the city on foot, with the only exception of the San Sigismondo abbey. For the sweet tooths it may be nice to know that Cremona is also the home of the torrone , a kind of nougat, which you may buy at Sperlari ‘s. 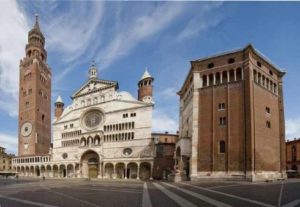 The magnificent facade of the Cremona cathedral is a sight you’ll not easy forget and the city is worth a visit for this monument of architecture alone. The face of the Duomo is a history book of architectonic styles , from Romanesque to Renaissance as it is the result of a series of reconstructions from the 12th till the 16th century. The lower part of the facade dates from the early period, the upper part ( loggia ) from the Renaissance. Note the sculptures of the prophets, the Madonna with Child and two bishops, the symbols of the Evangelists, the months of the year and the sarcophagi under the portico, especially the one of Folchino Schizzi by Campione . The splendid interior is very richly decorated by the masters of Cremona and Lombardy. Look for the Crucifixion and the Deposition paintings of Pordeone and the fresco decoration on the side walls of the nave (early 16th century), portraying the Life of Mary and Christ, the first of which is by Boccaccino and the others by Bembo, Gatti, Pordeone etc. Worth a closer look are also the richly decorated pulpits, the choir and the crypt with the altar of St Marcellinus and St Peter and the remains of St. Omobono. The cathedral is connected to the Torrazzo via the so-called Bertazzola portico , of the Renaissance period. Take your time to admire this gioiello !

With its 112 meters the Torrazzo tower cannot be missed when you visit Cremona and it has become the symbol of the city . The tower claims to be the third highest brickwork bell tower in the world and the oldest still standing. The tower was built in four stages , the first initiating in 1230. The top marble spire was completed in 1309. The astronomical clock dates from the 16th century and indicates the path of sun and moon through the zodiac as well as hours, days, months and the lunar phases. It still functions (but whether it gives the correct indications?). You may climb the 500 steps (the number differs according to the source, please count them and inform me and I’ll prepare a statistic!) of the stairs to reach the upper floor and enjoy the panorama.

On the Piazza del Comune adjacent to the Duomo lies the octagonal baptistery , a 12th century construction but with 16th century adjustments. The original facade of brick was (partly) covered with marble to achieve more unity with the facade of the cathedral and the portico entrance with the lions and upper loggia were added as well. The interior with its beautiful dome may still be admired in its original state. In the center there is a 16th century baptismal font , octagonal as well, of solid red marble. Worth a look are a 14th century crucifixion and other statues and fragments of the Middle Ages. A peculiarity are the incisions on the outer wall facing the Camposanto dei Canonici . Legend has it that these were made by prisoners that were condemned to death and that spent their last night in the chapel. 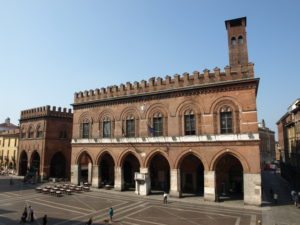 Opposite of the Duomo on the Piazza del Comune stands the building of the former city council of the 13th century.The building was largely reconstructed and widened (15th century) and now consists of several porticoes and courtyards. The city tower is enclosed by the structure of the palazzo . In the courtyard there are some fragments of 13th century frescoes .On the first floor there are several interesting rooms such as the Sala del Consiglio (paintings of Miradori, ), the Salone della Consulta , the Sala della Giunta and finally the Saletta dei Violini . The last room holds the city collection of string instruments : Gli Archi di Palazzo Comunale .

The Loggia dei Militi is one of the historical buildings facing the Piazza del Comune , lying a little aside. It resembles the Palazzo del Comune as well as the Palazzo Cittanova . As the plaque on the facade says, it was built in 1292 and it used to be the place where the communal militia held their meetings. There is just one room on each floor. In the 16th century the building became the courthouse that could only be entered through a small staircase, which the people nicknamed the Scala dei Lupi, the wolves’ staircase. In later times the building was modified, but at the end of the 19th century it was brought back to its original state. The plaque on the facade not only gives the date of construction of the palazzo but also displays the city banner, flanked by four lions that represent the city gates or districts. Under the portico you’ll find the emblem of the city . Two Hercules like figures hold the emblem, Hercules being the founder of the city, according to myth. On the emblem an arm is represented, holding a golden ball . This representation can also be found on a wall in the courtyard of the Palazzo del Comune and is related to an anecdote about the paying of the taxes to the emperor, in the form of a 3 kg golden ball. The mayor Baldesio refused to pay the excessive tax, beat the emperor himself in a duel an kept the ball for the city. 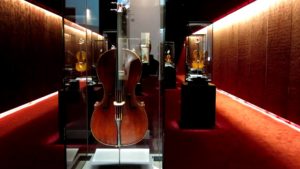 In the Palazzo Affaitati  you’ll find the Stradivarius Museum. The museum displays artifacts and tools from the workshop of the maestro, as collected by the 19th century violin scholar Cozio . You’ll see tools, drawings and models for the construction of string instruments as used by Stradivarius himself, but no complete Stradivarius violins . For those you need to go the city’s string instrument collection at the Palazzo del Comune . The museum is organized in three sections :

Cremona is the city of the violin, as Stradivarius , Guarneri and Amati , amongst others, lived and worked here. The city owns a rich collection of historical string instruments and they are on display in the Palazzo del Comune . The collection can be found on the first floor of the palazzo in the Saletta dei Violini (entrance in the courtyard).

The most important pieces of the collection are:

They all have names, like pizza’s, they’re just a bit more expensive.

For those who are very interested it is possible to arrange for a live performance with one of the violins of the collection , but you’ll have to book 15 days in advance (contact ticket office). But if you are lucky, you’ll find Andrea Mosconi playing several of the violins, as he does every day, to keep them in good condition. There is an elevator to grant access to the disabled. 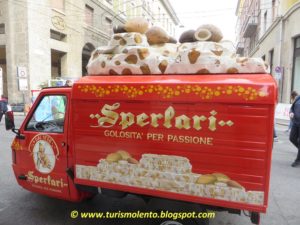 This shop, again (like the La Pobbia restaurant in Milan), is one of the Locali Storici d’Italia , specialized in the Cremona delicacies torrone (nougat) and mostarda (something different than mustard). Sperlari used to be the supplier to the prince of Piedmont Umberto and the Queen Mother Margaret, so if you decide to buy here you are in good company. Torrone is a type of nougat , hence made of honey, sugar, and egg white, with toasted almonds or other nuts. It got its name probably from the form in which it was first presented, the Torrazzo of Cremona, at the wedding of Bianca Maria Visconti at the San Sigismondo . Mostarda is a condiment made of candied fruit and a mustard flavored syrup, the Cremona variant being made of several kinds of different fruit. It’s rather sharp, beware not to inhale! Except for the torrone (in all sorts and kinds) and mostarda , you may also come here to buy graffioni (chocolate pralines filled with cherry and liquor) or cotognata (quince preserve). For even more products typical of Cremona, see the website of the Fieschi factory from which you can also download a product brochure in English .

Each year at the end of November the Festa del Torrone is held in Cremona, with events, shows and tastings.