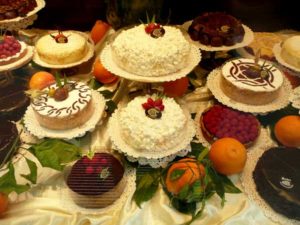 Italian pastry shops are incredible. They more like art galleries than negozi where you can actually buy something to eat. Food really is an art in Italy. Do not forget to spot these little artisan spots when you visit a city. You do not even have to enter the shop itself to have a mouthwatering experience. The little cakes are very delicately decorated with the tiniest of tasty ornaments. And they often are costly as the jewels they seem to be imitations of. I guess Italians buy these pastries only when they want to make bella figura, to give as a present to a host, on the occasion of an anniversary and so forth. Every now and then you see an Italian carrying a beautiful box on the palms of his hands with such a pastry treasure in it. Careful, careful! Please don’t let it drop!

Pastry shops and bakeries in Milan and surroundings